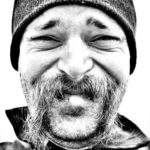 Alfredo Morte_ Design, Applied Arts and Sculpture Technician, He achie- ved a “dishonorable discharge” from UCM before completing a Major in Philosophy. He introduces himself as a carpenter for emotional reasons and he learnt all he knows about electricity by experimenting with engi- nes found in pieces of junk picked up on the street. For the last ten years Alfredo has collaborated on and directed several independent art pro- jects and collectives focused on interactivity and reflective involvement of the public. Through his experimentation with machinery and sound he has taken part in international exhibits.From 2009 he conducts work- shops where he imparts the basis for an introduction into the recycling of electrical appliances and the use of engines for artistic ends.